While working on touching up the photos I took yesterday at Oz-Stravaganza! 2013, my Macbook pro went dark. It is now a hi-tech brick (i.e. something that can be used only to hold an old door open while blinking a little light). Not being a superstitious man, I would never suggest that there was some magic at play here... even if there was.  I'll just say that at least one of the Authors wasn't keen on an impromptu photo shoot, and another used magical poses that just may have infected the digital circuitry of my iPhone. I suppose this is a mystery that will never be revealed, but you never know what true Word Wizards are capable of!
So, this post will be heavy on prose and light on images. And, since an image is worth a thousand words, forgive me if I am verbose. I'm making up for lost pixels.
I know many of you are fighting self-inhibiting mantras like, "I don't read much"; and, "I have a short attention span", so I'll keep some important information at the top of this post.
Here's the short of it:
Author's Alley is in Glinda's Royal Tent, today, Sunday, June 2nd, 2012, from 12:30 - 3:00 PM.  If you didn't get to see the Authors yesterday - please don't miss them today. I suppose I said "please" to be polite - but really, you aren't doing me a favor here - I'm helping you in ways you don't even understand, yet. If you did get to see them yesterday - you should go back today and buy that book you were on the fence about yesterday (just sayin').
Yesterday, I got to see Dennis Anfuso, Gwendolyn Tennille, and Eric Shanower again, as well as meet Tom Hutchison, Bill Bryan, David Maxine, and Christianna Rickard. A thousand curses to the digital demi-gods of chaos who bricked my Macbook pro after I had transferred (and deleted) the pictures of these artists at work, meeting their fans, shaking hands, signing autographs, and posing so sweetly and/or sinisterly.


Imagine if you will... Munchkins running here and there, delivering cold water to the Authors.  A cool orb of power filling their area of the tent and creating refreshing breezes to quell the heat of the day. Imagine rich smiles on the faces of fans; and, grateful hearts for recognition so well deserved. If you can imagine that - then to Hell with the pictures I lost!  (And the most important parts of that little scene were true!)

So why do you want to meet these folks? Well... that is a fair question. Here is how I look at it. We are celebrating L. Frank Baum because of a series of books he wrote that took place in the Land of OZ. One of the first astonishing things that I learned, when I moved to Chittenango, NY, a few years ago, was that there was more than one book written about Oz. That really was an eye-opener for me. I got another eye-opener, when I learned that others had continued writing in what can only be called a "Shared Universe" at this point. Today, you have a chance to meet folks who are continuing this fantastic tradition!  If that doesn't excite you, I suggest you make a point to attend the Royal Historian of Oz Writing Contest Awards at 11:00AM, today, on the Main Stage in Oz-Stravaganza! Park. See first hand how stories impact the younger and older among us.
The stories that L. Frank Baum wrote, and the stories that these authors are penning and illustrating today, are helping shape our dreams. Fantastic settings, such as those found in the Land of Oz, touch our collective unconscious in ways that only the great psychologist, Carl Jung, could properly explain. Great fantasy stories entertain; there is no doubt about that. But, they also shine light on the world we live in. They inform us about who we are, and where we are headed.
Each one of the authors in Author's Alley has a unique perspective on the collective fiction written about the characters that live in The Land of Oz (and surrounding territories). Each author brings something of themselves to their works, in ways that no one else can. There is magic in that, for sure.
Eric Shanower is an award-winning cartoonist who has flown in from San Diego, California. If you spend any time in comic book stores, you have seen his Oz works on the shelves. Much of his Oz comic artwork conveys a modern and slightly quirky feel to the Oz characters that cannot be found anywhere else. For something truly cool, check out Marvel's Ozma of Oz.
Tom Hutchison has taken the Oz theme into the Wild Wild West with his The Legend of Oz: The Wicked West comics. I haven't read these yet, but I will definitely check out what seems to be a sexy Dorothy as a gun slinger!
Gwendolyn Tennille has flown in for Oz-Stravaganza! 2013 from South Carolina, and her works range from gothic/fantasy to landscapes and everything in between. She loves bringing her imagination to life, and has done so as an illustrator is such well-known books as: Of Cabbages, Kings, and Even (Odd) Queens, The Talking City of Oz, and Whether the Sea is Boiling Hot and Whether Pigs Have Wings.
Bill Bryan drew and occasionally wrote for Oz, Land of Oz and Dark Oz, a sword & sorcery version of The Wizard of Oz. 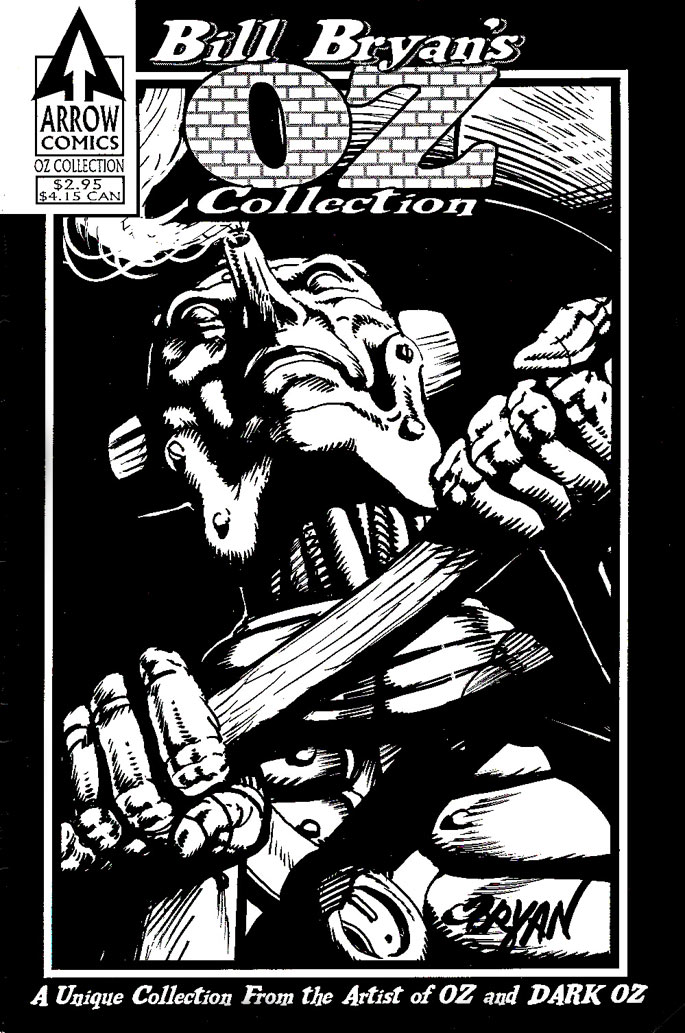 If you are a teen-ager - or teen-ager-going-on-forty-five; and have an eye for the darker side of Oz, you will not want to miss your opportunity to meet Bill Bryan.  And, I'm not just saying that in hopes that he lifts the curse off of my laptop! Bill has some posters and comics that belong in your collection.
Christianna Rickard is an author and popular public speaker. She was particularly close to her uncle, the great Ray Bolger, who was a Broadway star best known for his role of the Scarecrow in The Wizard of Oz. Recently, Christianna wrote Remembering Oz:  My Journey with the Scarecrow. While I haven't read it yet - I own a copy. Christianna has focused on a spiritual life, and I suspect this book will be filled with much more than her memories of her Uncle Ray. I suspect her book will bring out the magic of Oz in ways that will edify and heal.
Dennis Anfuso is a graduate of the School of Visual Arts in NYC class of 1978. He majored in book illustration and cartooning, and unlike many people I know - he learned a thing or two while in school!  Dennis hails from New Hampshire, and that "Live Free or Die" spirit can be seen in his artwork. Two years ago, Dennis drew me a quick rendition of the "Gnome King" right in front of me. It was amazing how quickly he was able to capture the character and bring him to life. I hope you have an opportunity to check out Dennis's works, when you take a stroll down Author's Alley.
All of the Authors in Author's Alley are worth your attention. You can find them in Glinda's Royal Tent, at Oz-Stravaganza! Park, in Chittenango, NY, between 12:30 PM and 3:00 PM, Sunday, 2 June, 2013.